Attending a seminar about turnout of young voters in Norway at the Institute for Social Research, I am reminded of Sasha Issenberg’s excellent book The Victory Lab: The Secret Science of Winning Campaigns

from last year. Here is a mini-review:

Great story of the work of political campaigns and political participation generally. Someone interested in applying the methods in another context, such as another country, must keep in mind how much they rely on the public voting files that give information of whether someone voted. Without these, the micro-targeting made possible by matching the voter records with consumer databases and census information would not be feasible, and it would make experimentation much more difficult. Recommended, but there is one thing that bothers me: The actual politics is often lost sight of. It would be great if these advances also could contribute to improving policy.

Below is a really long summary:

I learned this from a newly published paper (gated) by my friend Paulo Cox and his coauthor Alejandro Corvalan. If one guessed, e.g. on the basis of rational voter theory, that this rule would cause registration and turnout to plummet, one would be right. There is more to the story in Chile, though, as voters registered en masse to vote Pinochet out of power in 1988. After that, however, the prediction has it right, with the result of a gap in turnout of around 60% (ca 90-30) between older and younger voters in the 2009 election.

Corvalan and Cox’ main concern is the representativeness of the electorate, and they show that income is highly correlated with registering and voting among the young (when controlling for education, etc). As the young become old, this “class bias” might come to hold for all voters.

One person, one vote is a cherished principle, however, in most countries the representatives to the national legislative body come from certain fixed geographic regions. E.g., in the US Senators are elected from the states, while the  members of the House of Representatives come from a congressional district.

In Norway, each of the 169 representatives in parliament, the Storting, comes from one of 19 counties. At the heart of the distribution of seats is a weighted sum of the number of inhabitants of a county and its area, calculated as follows: #inhabitants+1.8 x area in sq.m. So 1 sq.m. counts as 1.8 person. This is a systematic overrepresentation of people in counties with relatively low population density and corresponding underrepresentation of people in more densely populated counties.

Due to migration within the country and a small reform, the allocation for the elections of 2013 and 2017 is shifted somewhat. More populous counties will now be a little less underrepresented: 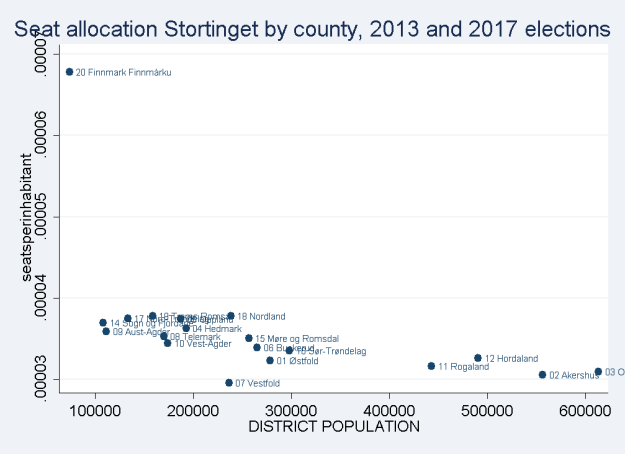 This topic is currently on my research agenda, so I will return to it in not too long. A seminal paper (pdf) by Samuels and Snyder,  more countries on Andrew Gelman’s blog, discussions of representation in the US Senate on CrookedTimber and in the New York Times.

Update: for Norwegian readers: Discussions from the election in 2009, from Minerva, Aftenposten and Ferskvannsmandatet.