A silly proposal to spend public money on giving everyone a type of sports equipment that in average can be used around one quarter of the year got me wondering how many Norwegian actually do ski. So I looked up some data from Statistics Norway’s survey on living conditions: 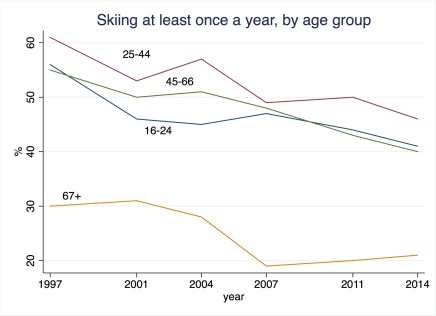 More than half the population skis at all, skiing (on the extensive margin) is clearly on a downwards sloping trend, but is free skis to everyone the solution? Given that skis can be obtained nearly for free already, perhaps interest is just not that high. Better to build out opportunities for all-year activity close to where people live, restrict time spent watching television, raise sugar taxes, and get more physical activity into school.

Many reported the paper on smart phones and child injuries by Craig Palsson the previous days. The finding is that the construction of 3G networks in US cities may have lead to increased use of smartphones, less supervision of children, and more children going to hostpital with injuries. I believe most parents are too restrictive, so I was happy to see the following sentence regarding the welfare effects:

“Even though child injuries should not be taken lightly, some might argue that parents were oversupplying supervision or that injuries help build character, and therefore the smartphone-induced injures are welfare enhancing.”

Though I would rather call it a sign that the children are more physically active, which is good for both body and brain, as shown by a recent RCT. And as I have written about before, children tend to be very active during self-organized play.

The telling figure below from an NBER paper (wp) by Allen, Dechov, Pope and Wu has been shared by several people this summer. From data on almost 10 million marathon finishing times, they show how people use their prospective finishing time as motivation to provide more effort and bunch at every 30 min. interval. 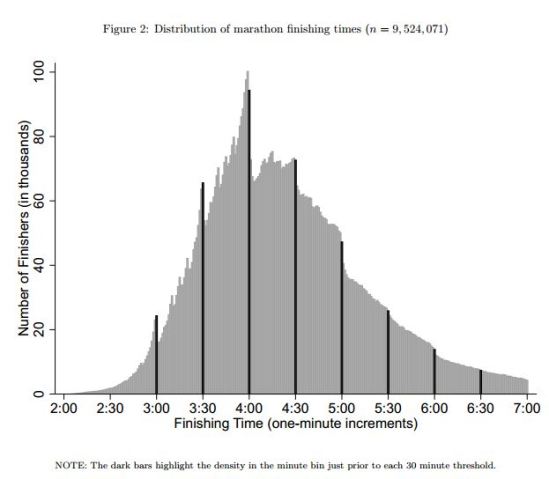 When following the Norseman Xtreme triathlon online last month, I googled Graeme Stewart, who lead the race for quite some time, and came across his blog. A post of his pointed me to an interesting article about the age and performance of the top ten finishers in the yearly Ironman World Championships in Kona, Hawaii. The authors (Gallmann, Knechtle, Rüst, Rosemann, Lepers ) first show that as in many other sports, the finishing times (of the top 10) have improved considerably the last 30 years (1982-2012): 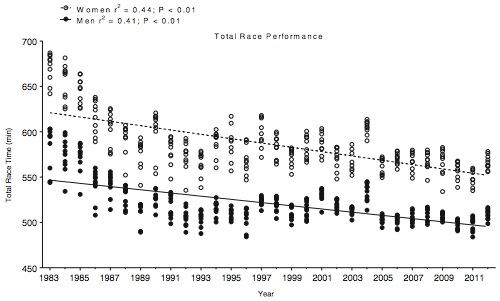 This can be due to many factors. The surprising finding is that concurrently with going faster, the top finishers have become older. The average age of the top 10 men increased by 7 years, from 27 in 1983 to 34 in 2012! 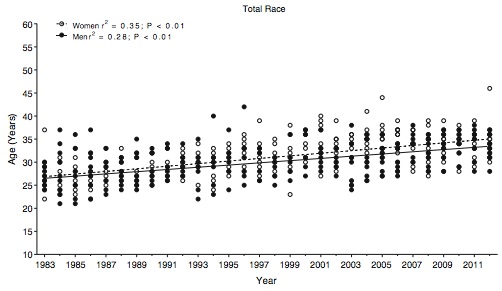 The authors speculate that experience may have become more important with time or that the race may have become more attractive to former professional athletes, but do not know the answer. The point Stewart makes is that the results suggest that it takes time to build endurance and that for most people there is room for improvement regardless of age.

“Lionel Messi is impossible” by Benjamin Morris on Lionel Messi’s goal and assist statistics the last four years is the best player-focused piece of data-based analytical football writing I have ever read, and a perfect warm-up for tonight’s match. Short summary: Messi is an outlier in nearly every desirable offensive way. Above is one example.

I have seen the World Football Elo rating system referred to a couple of times during the World Cup. People seem to think that it is much better than the Fifa ranking system, although I am not sure that is a high bar. Nevertheless, I became curious, so I decided to look it up. That was easier said than done, and this post became much longer than planned, but here is the result.

According to the football Elo ratings website and Wikipedia, the Elo rating system was developed by Arpad Elo to rank chess players, and adapted to football by Bob Runyan in 1997. The website is clear in giving the formulas used to compute the actual rankings, but lacks information about the motivation behind the choice of parameter values. A key idea is that it is a 0-sum game where points are distributed on the basis of both the actual result and the strength difference between the teams. Here is how it works:

K governs both the weights given to different matches, and how much the outcome of the last match counts relative to the previous rating.

The last one gave me a bit of a hard time. After consulting the book Who’s #1?: The Science of Rating and Ranking (2012) by Langville and Meyer and the paper The predictive power of ranking systems in
association football (ungated) (2013) by Lasek Szlávik and Bhulai, I learnt the following:

We is the expected win probability and results from assumptions about the performance distributions of the two teams, which themselves depend on the prior rating. To calculate this probability one needs to assume performance distributions for the two teams. It appears that to make it a little simpler, what is often assumed is a distribution of the performance differential directly. The chess system for some reason assumes that the performance difference is distributed as a logistic function (to the base 10) of the difference in ratings. Since that function is 1 / (10-x + 1), with x=dr, one can see that we are approaching the expression we are aiming at. But where does the constant 400 come from? Also from the chess rating system. The value of that constant governs the variance of distribution. If it is “really small” there is little variance and the player/team with the higher rating will almost always win, while if it is “really big” the lower rated team will be lucky and win more often. (In the limit as it approaches infinity, any match will be a 50-50 draw, no matter the rating difference.) The home team advantage of 100 rating points looks a little like it is taken out of thin air.

Langville and Mayer praises the Elo system for the flexibility it gives in the choice of the K parameter and the scale (variance) parameter in the win probability distribution, since it means users can tailor-make the system to their particular purpose, but then it does seem a little peculiar that the football system has simply copied most of the chess system.

Without any documentation, the parameter values seem like a haphazard mix of some things kept from the chess rating system and some just made up. That is not to criticize the creator Runyan or people who use it, and apparently the system is performing quite well, but it would be nice to know if there was some specific thought behind the choices made.

For those interested to learn more, I can recommend the two references above.

People should not bite each other. Neither should they push, kick or stamp on each other. That is why we have regulations against these sorts of behavior, both on and off the football pitch. When someone breaks these regulations, (s)he is punished. The punishment is presumably related to the severity of the offense. Not so. Luis Suarez’ bites are less dangerous than many of the tackles that occur almost every football match (and that are deservedly rewarded with yellow and red cards when the referee sees them, as biting should be). Yet the previous time Suarez bit, he was given a 10 match ban, making it to no. 5 on Top 10 longest Premier League bans. Joey Barton is no. 3 on that list with a 12 match ban, because he “elbowed Carlos Tevez, kicked Kun Aguero and attempted to headbutt Vincent Kompany.” Comparable offenses?

Besides, Suarez’ acts are so irrational and non-self serving as to be covered by an insanity defense.

Carl Bialik (previously known as The Numbers Guy) at 538 argues that Manchester United was exceptionally lucky in Alex Ferguson’s last season, and that David Moyes just kept steady a downward trend. Bialik’s point is that looking at finer measures of performance than simply points, such as the share of shots taken and the goal differential, United should not have done as well as ghey did last year, so Moyes should not be blamed for the (apparent) decline this year. There is a nice graph of the development of United’s share of shots taken the last 12 years in the post showing this clearly.

“Is soccer good for you? The motivational impact of big sporting events on the unemployed” is an article in Economic Letters (ungated) by Philipp Doerrenberg and Sebastian Siegloch at IZA that I believe a lot of people wished they had written. The authors analyze the effect of the Euro Cup and the World Cup on the unemployed in Germany:

We examine the effect of salient international soccer tournaments on the motivation of unemployed individuals to search for employment using the German Socio Economic Panel 1984–2010. Exploiting the random scheduling of survey interviews […] We show that respondents who are interviewed after a tournament have an increased motivation to work but, at the same time, request higher reservation wages. Furthermore, the sporting events increase the perceived health status as well as worries about the general economic situation. We also find effects on the subjective well-being of men.

The unemployed are made more motivated to work and more worried, and to perceive themselves as being healthier, but men’s well-being is decreased. Ht: Kevin Lewis.

Glen Nielsen measured children’s movement using accelerometers – devices measuring the number and strength of the children’s accelerations – for his PhD project. ScienceNordic reports that the children exhibited the most intense physical activity during free play rather than organized sport. I am a supporter of organized sport for many different reasons, but it is important to let children’s areas allow them to create their own exercise, such as tree-climbing, football, and other types of games.